One of the greatest strengths of using animation to tell a story is the ability to bring the creator’s imagination to life. Whether through pencil drawings or computer images, creatures and locations can look exactly as they should, with no real-world limitations to restrict them. This is especially seen in landscapes that seem foreign or operate on their own logic.

Related: 10 animated shows that parents and children can enjoy

In children’s animation, traveling to other worlds offers escape for children in search of a more interesting reality than their own. However, they are often not all fun and playful: sometimes behind the smile hides an enemy in disguise, and beyond the next mountain there might be a lesson in maturity waiting to be taught. Neither they nor the audience will find out unless they’re ready to take the next step.

adventure time is perhaps the most important cartoon of the last two decades. Fin and Jake’s story and their adventures through the Land of Ooo helped draw cartoon network emerge from its dark period and spearhead a new golden age of children’s cartooning. It accomplished this through its memorable characters, willingness to tackle heavy themes, and simplistic yet creative art style.

The Land of Ooo offers many landscapes for the characters to explore, from a kingdom inhabited by living candy to an endless dungeon. However, Fin and Jake sometimes find themselves in parallel universes, on other planets, or even in the land of the dead. That’s when the hosts and writers could get creative and quirky on a show well known for being just that.

‘Star Vs. The Forces of Evil’ 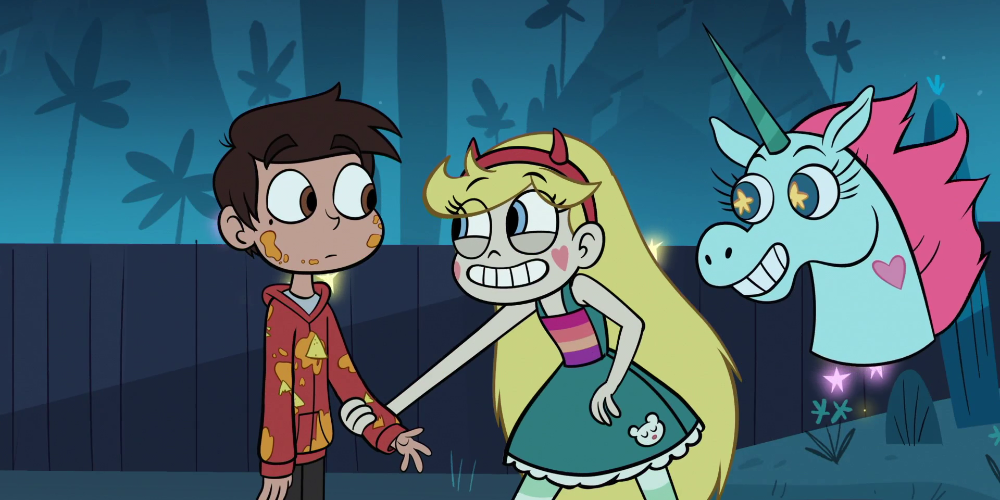 Princess Star Butterfly of Mewnie receives a magic wand on her fourteenth birthday. However, her unruly nature convinces her parents to send her to earth as a foreign student so she won’t destroy their castle. Teaming up with a boy named Marco, she learns about Earth’s culture, fights monsters, and grows as both a magic user and a princess.

Star and Marco’s adventures are not limited to Earth and Mewnie. Through an item called Dimensional Scissors, they can travel to all sorts of universes, many of which are aware of each other due to this dimensional travel. It offers an interesting look at how different worlds would embrace diplomacy with each other, especially in today’s multiverse-obsessed society. 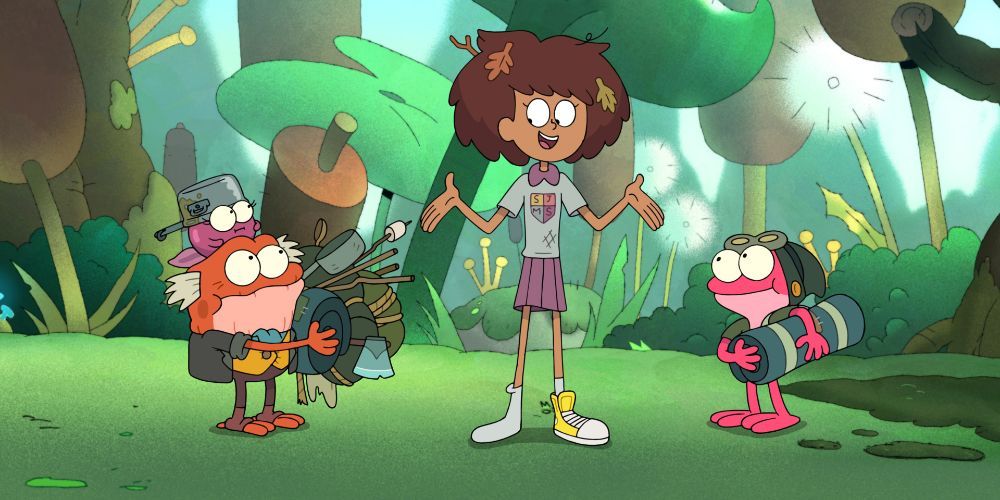 When Anne Boonchoy steals a music box for her friends, it opens a magical portal and sucks them into the world of Amphibia. Anne is separated from the others and lands in the village of Wormwood. She is accepted by the Planter family, and together they teach each other about their respective cultures while trying to bring Anne and her friends home.

Related: Why Amphibia’s “True Colors” Season 2 Finale Is A Triumph

The idea of ​​a world populated by frogs allows amphibians plenty of room to be creative, especially in its wildlife. While many creatures look like oversized versions of snakes, praying mantises, and dragonflies, they’re enhanced with new features that help them feel alien. It’s also fascinating to see how a frog society works, especially with other anthropomorphic amphibians like toads and newts creating a distribution system.

“Over the Garden Wall” 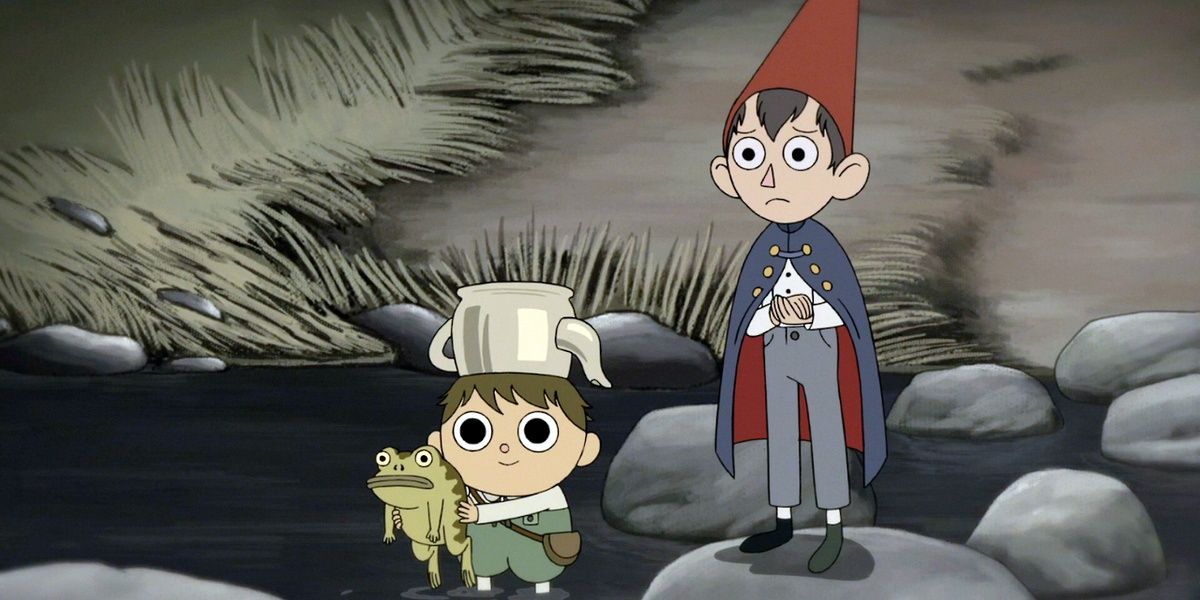 Cartoon Network’s first miniseries tells the story of brothers Wirt and Greg. On Halloween, they find themselves far from home and lost in a mysterious forest called The Unknown. With a talking bluebird named Beatrice as their guide, the brothers try to get home while avoiding the mysterious beasts that lurk in the woods.

Related: Why ‘Over the Garden Wall’ should become your new Halloween staple

The unknown is a fascinating world because it plays with one’s perception. It feels like stepping into a fairy tale, where the characters are referred to by their profession rather than their names, the animals go to school and the magic is very real. Very few things are what they seem, and every day the boys must run from the feeling of despair lest it keep them lost forever. 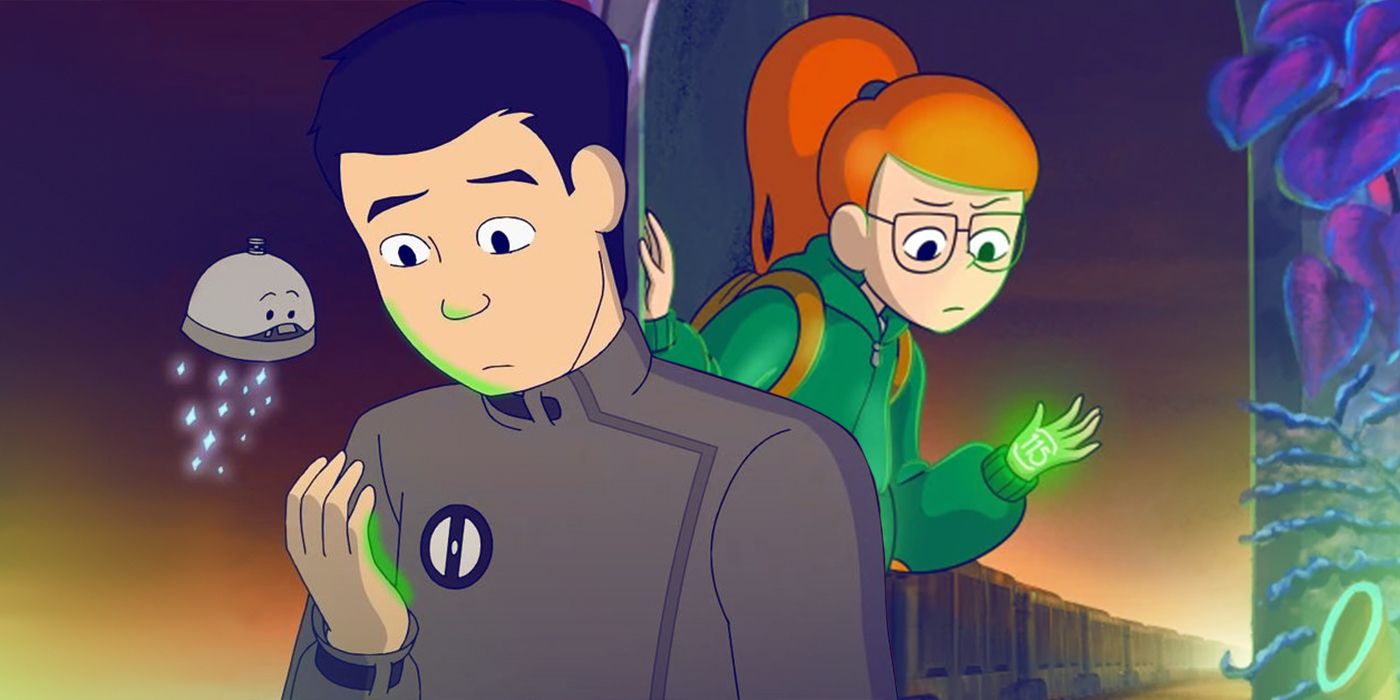 Somewhere in the multiverse there is a train that travels forever. He finds people with unresolved trauma, brings them on board, and assigns them a number on their hands. As the passengers navigate the many cars and deal with their problems, the number on their hands decreases until it reaches zero, and they can go home.

Related: How ‘Infinity Train’ Got Too Big For Cartoon Network

A little like adventure time,infinite train allows its characters to explore micro-worlds connected to a central world. The different cars lead to unique and creative landscapes related to helping the passenger deal with their trauma. It offers an interesting look at the depth of trauma that can be buried in the human mind and the amount of work it takes to move on. 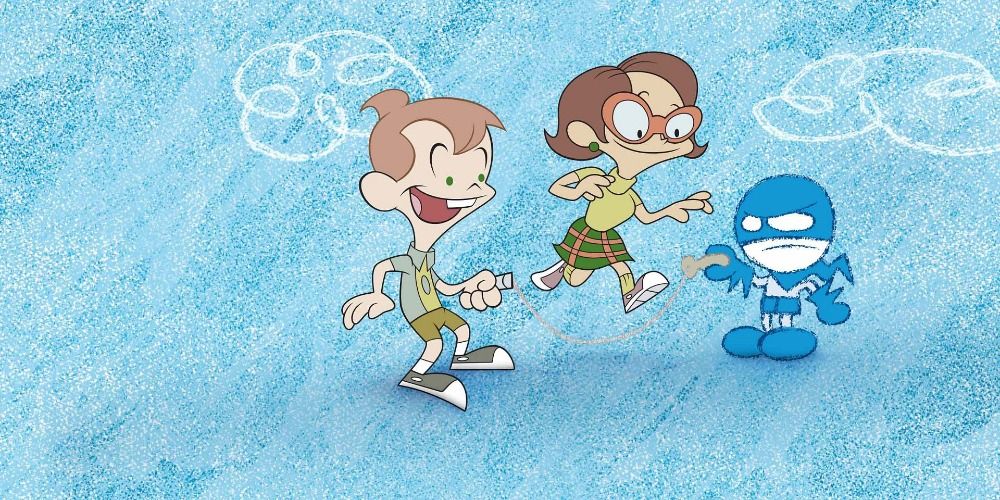 While in custody, young Rudy Tabootie finds a piece of magic chalk that allows him to enter ChalkZone. In this land, every drawing that has ever been erased from a blackboard is a living, breathing creature, including Rudy’s superhero creation, Snap. Joined by Rudy’s friend Penny, they explore ChalkZone and attempt to protect it from humans and drawings who wish to harness the chalk for their own ends.

Magic Chalk allows Rudy to create whatever he wants in ChalkZone, allowing for creative problem solving. Things he adds to the world become permanent, like a second eye on a Cyclops to give him depth perception. It’s not perfect, though, as things like real-world water and vacuum cleaners can bring on the apocalypse. 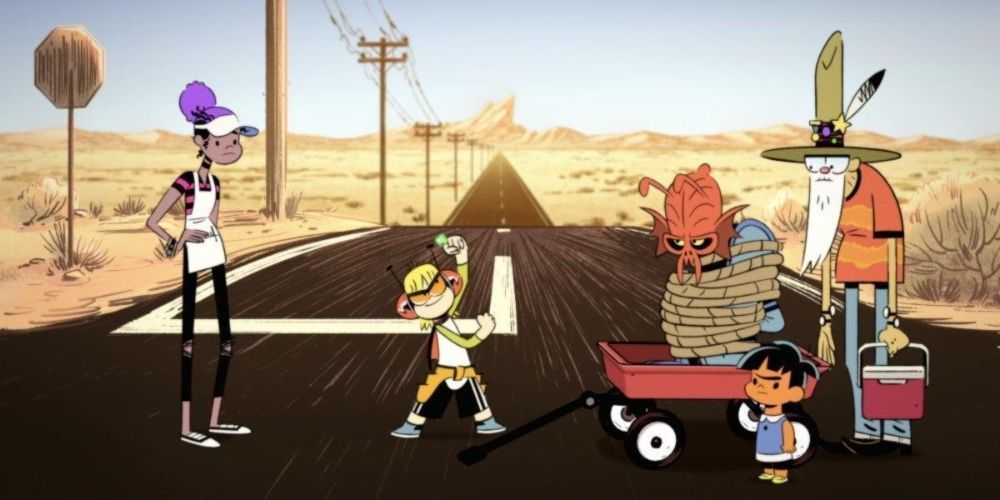 One night in the middle of nowhere, a child called Kid finds a series of space rocks that grant their wearers superpowers. He attaches them to rings and distributes them one by one to his friends to form his own team of superheroes. Together they fight to protect the community from aliens who want to acquire the stones for galactic conquest.

While the first season takes place on earth, the second season of the show teleports the local truck stop into space. This allows characters to discover fun alien planets, each with creative designs and a few new Power Stones. The show is a beautiful tribute to pulp sci-fi stories, led by the creator of The Powerpuff GirlsCraig McCracken. 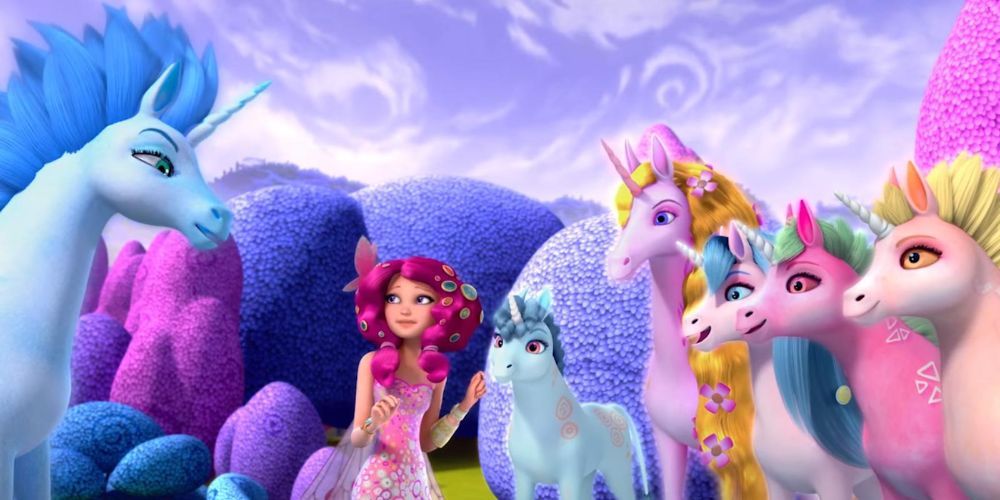 When Mia Marconi receives a book from her deceased father, she discovers that it is a portal to a magical land called Centopia. Here, Mia transforms into an elf and befriends many of the land’s inhabitants, including elves, pans, and unicorns. Together they try to figure out the mystery of the book and save Centopia from encroaching evil.

Although designed for a younger audience, Mia and me is a fully functional show. The world of Centopia has bright and vibrant colors, and the designs of the different creatures, especially the unicorns, are creative and fun. It provides a stark contrast to the human world, which is presented using live actors, reflecting the imaginations of children watching the show. 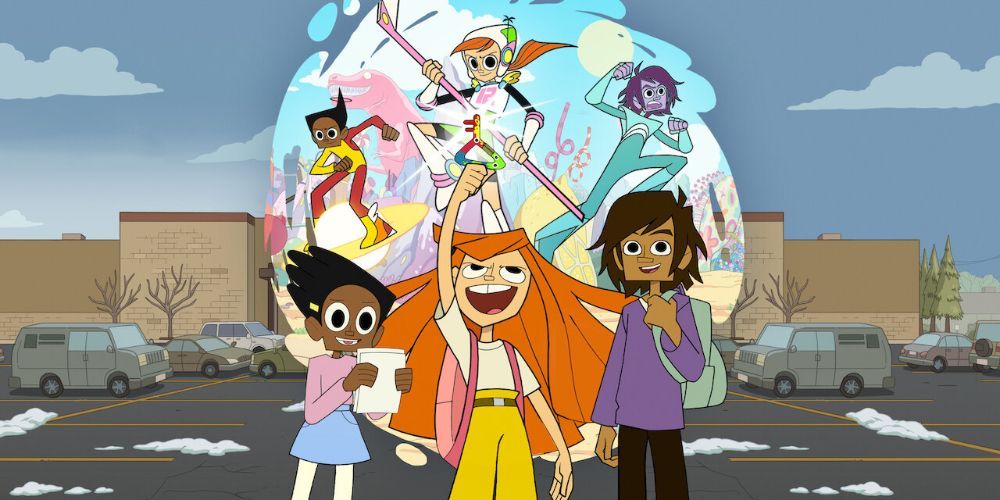 Reggie Abbot loves being a kid and never wants to grow up, to the point where she’s created another world called Endless, populated by all her old toys and drawings. With his friends Todd and Esther, they have fun playing superheroes and avoiding real-world responsibilities. Unfortunately, the more they run from their problems, the more their problems follow them into Endless.

The Endless Island works wonderfully as a filming location for the series. Its inhabitants are bright and colorful, worthy of children’s toys. Yet many of them also have off-putting designs and are unable to make decisions without the help of the main characters. It’s a subtle way the series represents the transition from child to adult.

In a dystopian world, a horse and rider are attacked by Minotaurs as they retrieve a magical artifact. The horse wakes up to find he can talk and has been transported to a strange world of centaur creatures. Teaming up with a friendly herd of centaurs, she embarks on a quest to combine her artifact with other similar ones scattered around Centaurworld in hopes of returning home.

Centaurworld asks how many things can be turned into centaurs, and the answer is “everything”. In addition to using more animals than just horses, inanimate objects like buildings and tornadoes are transformed into centaurs, providing a unique design that contrasts with the harsher, more grounded world of Horse. Still, there is a danger present in the pastel world, as the longer Horse stays, the more his artistic design evolves to resemble the locals.