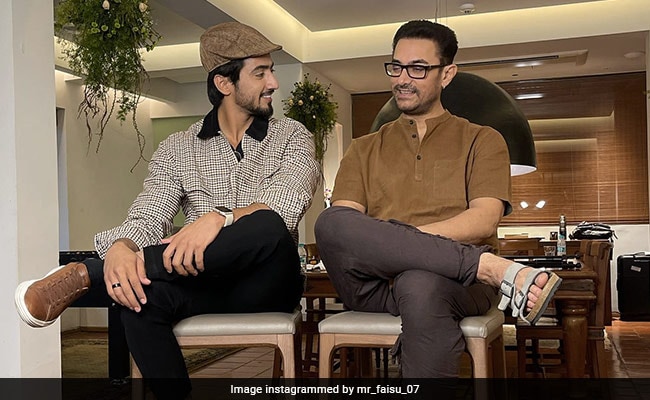 Aamir Khanwho is busy promoting his next movie Laal Singh Chaddha, recently recreated one of his iconic scenes from his 1994 comedy film Andaz Apna Apna, with Salman Khan, Karisma Kapoor and Raveena Tandon. The veteran actor recreated the scene with internet sensation Faisal Sheikh aka Mr. Faisu. They recreated the scene on the bus when Salman Khan and Aamir Khan first meet and wonder about each other’s outfits. In the video, the Lagan actor can be seen speaking his own lines while Faisal speaks Salman’s lines. Sharing the video, Faisal captioned it as follows: “Toh baat aaise hai, Aamar Prem jaise hai I still don’t know how to put this feeling into words. What a day. What a sensation. Aamir Khan Sir, you are truly an inspiration.”

Shortly after sharing the video, Aamir Khan and Faisal’s friends and fans flooded the comments section. Aparshakti Khurana commented, “Hahahah,” wrote Esha Gupta, “(laughing emoticons) are the best,” while one fan wrote, “Bollywood star with the king of social media!!

Faisal Sheikh also shared several photos with Aamir Khan and captioned it, “I had an amazing time with the legend himself Mr. Amir I was totally overwhelmed. You are a true inspiration for us.” Check the message below:

Helmed by Rajkumar Santoshi, Andaz Apna Apna is considered a classic Bollywood comedy. However, when it was released in 1994, it was a box office flop. The film also featured Paresh Rawal and Shakti Kapoor in key roles.

Meanwhile, Aamir Khan will be seen alongside Kareena Kapoor in Advait Chandan’s Laal Singh Chaddha. The film is the Hindi remake of the hit film The Forrest Gump, starring Tom Hanks. It is set to hit theaters on August 11.

Previous article‘They’re Waiting for Me to Die’: A 72-Year-Old Runner Will Not Let This Race Go
Next articleNeetu Ghanghas and Amit Panghal won two boxing gold medals for India at the Commonwealth Games 2022

What will the January 6 final report include when it is released?