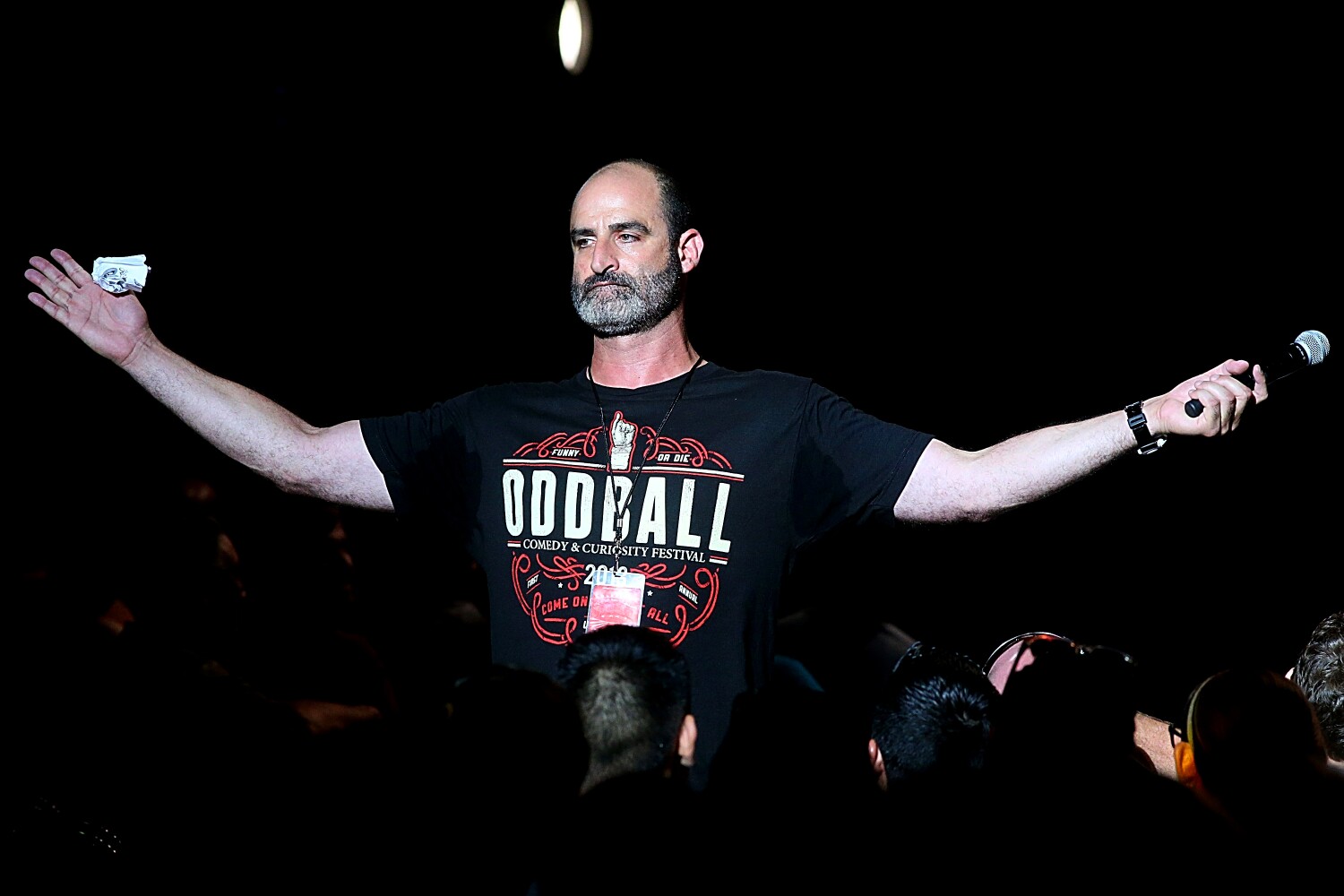 Comedian Brody Stevens was found hanged on February 22, 2019, dead at the age of 48, and the impact on the comedy community was immediate. Comedy clubs and festivals across the country felt more of a responsibility to promote mental health resources. The topic of depression moved from joking on stage to serious off-stage conversation. In August, fellow comedians gathered in Stevens’ honor for the unofficial 818 Walk, named after the area code of his childhood San Fernando Valley, which he often referred to in a self-deprecating segment. In 2021, the second installment of 818 Day included the official dedication of the LA Parks Foundation memorial bench in Stevens’ honor, funded by Mauricio Alvarado. Rockin’ Pins from a design he had created with Stevens prior to the comic’s exit.

As of 2019, Stevens’ sister Stephanie Brody recalls, “I’ve lost count of the number of emails I get from people who say my brother was the first—and sometimes the only—person to reach out and help them when they were starting out. … We always knew that my brother was a caring and kind person. But the stories we read took what we knew about him to a whole other level.”

This year’s event has benefited from the partnership Comedy gives back, a 501(c)(3) charity that helps performers in need of mental health support and addiction treatment. After Stevens’ death, the organization shifted its focus from gala fundraising to grassroots outreach, bringing awareness to the darker side of a seemingly frivolous profession.

“Brody always brought all sides to the audience,” says Zoe Friedman, a longtime producer/booker who co-founded Comedy Gives Back with Jodi Lieberman and Amber J. Lawson in 2011. “His comedy made you feel like you could hear what was going on in his brain and that he articulated it in real time. He let the audience peek behind the curtain of his inner workings.”

Friedman says her favorite part of the Festival of Friendship is the outpouring of love from comedians and fans who want to remember Stevens and bring the issue of suicide to the forefront. “If we don’t talk about it, we perpetuate the stigma around it,” Friedman says. “The more we can talk about Brody and why we lost him, I believe and hope we can help others.”

Saturday’s festivities begin at 9:30 a.m. with the unveiling of the new Brody Forever 818 mural at Firehouse Taverna (18450 Victory Blvd.) with Los Angeles City Councilman Bob Blumenfield, Stephanie Brody and other family members. Starting at 11:00 a.m., the 5K at Reseda Park (18411 Victory Blvd.) will take participants over the Los Angeles River and past Reseda High School, where Stevens was a star pitcher for the Regents baseball team. Registration is $50 in advance or $60 day of starting at 10 a.m. and includes a gift bag. Later, from 1 to 3 p.m. at the memorial bench site, the party will feature speakers, fellow comedians, a raffle, a photo booth, food trucks, and music from DJ Dense of the LA Clippers. Merchandise including shirts and Stevens like Rockin Pins shine will be available.

The Valley native was born Steven James Brody on May 22, 1970. He played Division I baseball at Arizona State University, although a hand injury ended a promising professional career. Stevens spent time developing in the Seattle and New York comedy scenes before returning to the LA stable and staying fit for the rest of his life. He remained a supporter of physical activity and healthy eating.

In Los Angeles, Stevens rose to prominence as host of Fox Sports’ “The Best Damn Sports Show Period” and E!’s “Chelsea Lately,” Comedy Central’s “The Jeselnik Offensive” and MTV’s “Ridiculousness.” As Stevens proudly stated on stage about his film credits, “‘Hangover,’ there! ‘Hangover II’ there! ‘Due Date’ there! Cut to ‘Funny People’…”

Her autobiography (“I’m intense! I get BO in the shower!”) sounded more like bark than story. Encountering audience members in deer headlights became a nighttime favorite among peers. Despite drug slogans like “Positive energy!” or “Push and believe!”, those close to him knew that his broad smile could seem unmistakably forced.

Stevens described himself as a restless child. “I was touched. But not by an angel,” began one of his most popular jokes. “The state was supposed to get three years, but the judge gave him six years. Why? Because I was harassed in a construction zone.” It couldn’t be entirely true, but a talent known for brutal honesty, right?

He battled depression from an early age and took various medications from his early 20s. Audiences and interviewers were often told that he had developed “adult-onset autism”. In 2010, while filming his documentary series “Brody Stevens: Enjoy It!” with executive producer Zach Galifianakis, he was hospitalized for 17 days at UCLA Medical Center’s psychiatric wing and diagnosed with bipolar disorder.

His 2017 special “Live From the Main Room,” filmed at the Comedy Store, divided fans of the web comedy. Despite being hailed as the “Prince of Periscope,” he was often leveled by negative social media interactions. Stevens had continued to take antipsychotics shortly before his death.

Stevens’ sister, Stephanie, who occasionally appeared in his jokes, says she brought much-needed awareness to the comedy industry about mental illness and the challenges it brings.

“He put a face on the disease and made it public for everyone to see. He wanted people to see that there’s nothing to be ashamed or embarrassed about,” she says. “I see comedians talking more openly about their own mental health issues and how they’ve dealt with them. I see comedians supporting each other and to be there for each other. I know he would be proud of his impact…just as proud as our family is of him.”

Even before the events of this year’s friendship festival, there were reminders that the process towards degmatization is still far from complete. On Thursday, July 14, the National Suicide Prevention Lifeline publicly announced that its 10-digit 800 number will be changed to a simpler 988 number. Later that night, popular scene piece Jak Knight, a highly successful actor, producer, writer and stand-up, was found self-inflicted on a Boyle Heights embankment gunshot wound to the head. Like Stevens, Knight was known for his positive vibe and welcoming nature.

“Telling strangers about yourself sounds more like therapy than work. But it is their chosen work. It’s not for everyone,” says Friedman, who cites family dysfunction, trauma, depression and a general sense of otherness as psychological reasons that can draw performers into the profession.

“Furthermore, their lifestyles can be very harsh and isolated: being on the road, sleeping late, concentrating and worrying about things on their own for long periods of time during the day. Comedians help make the audience feel better by making us laugh. I hope telling jokes can help them feel better too. It only seems fair, right?”

Or as Stephanie Brody says, “A comedian’s job is to make people laugh. People assume that if someone is funny, they must also be happy. That’s not necessarily true…. The struggles comedians experience are often masked by the sound of laughter. The comedy world is often overlooked in terms of mental health awareness because of this. Opening up and talking about mental health issues helps to remove the stigma. I’ve noticed a gradual change in that mindset. But our society needs to get to a place where mental health issues are not something to be ashamed of. I think we’re moving in the right direction, but we still have a long way to go.

<!-- -->Deepika and Ranveer in a still from the video. (courtesy: ranveersingh)New Delhi: Ranveer Singh's next movie Circus makes all...