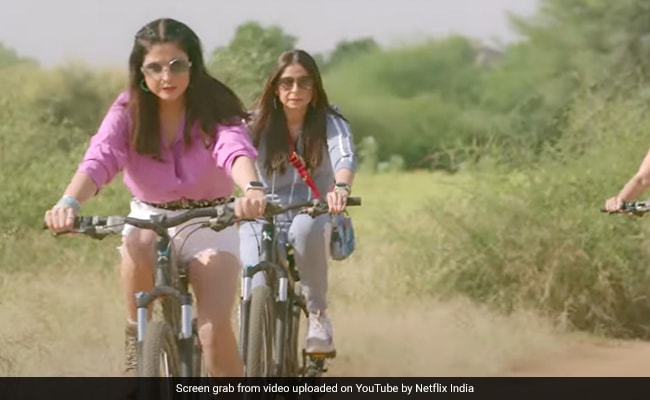 Did you miss the “Fabulous Brides of Bollywood” and their always entertaining chatter? Well, they’re back and this time they promise more fun, more glamour, “hot flashes”, more drama and not to be missed, “new crushes”. Maheep Kapoor, Bhavana Pandey, Seema Khan and Neelam Kothari’s Netflix show, Fabulous lives of bollywood wives, which brought them to the limelight in 2020, is set to return to the streaming platform with the second season to give us a detailed look into the grand lives of these stars. Seema Sajdeh (fashion designer and ex-wife of Sohail Khan), Maheep Kapoor (jewelry designer and wife of Sanjay Kapoor), Bhavana Pandey (fashion designer and wife of Chunky Pandey) and Neelam Kothari (actress and wife of the star designer Samir Soni) have been friends for over 27 years. In the continuity of the first part of the show, Fabulous Lives of Bollywood Wives 2 dives deep into the friendship of the foursome, as well as the grudges they have against each other.

The trailer begins with Bhavana Pandey sitting on a sofa in a blue shirt and jeans and saying, “You don’t know what’s coming” – this comes across as a warning to those looking forward to the series. The next shot shows the “four adult women” riding their bikes on a deserted track before Seema Sajdeh falls to the ground because it’s “always chaos” when they’re together (their words, not ours). “I don’t know what happened next because everything is a blur for me,” says Seema.

The following sequences show Maheep Kapoor giving her husband, actor Sanjay Kapoor an ultimatum of sorts – ‘you have to start liking me’ – and Karan Johar, who is also producing the show, trying to ‘connect’ the quartet and set up ‘dates you blind” for them with other celebrities. This time, viewers will see celebrities like Bobby Deol, Badshah, Arjun Kapoor, Jackie Shroff and Zoya Akhtar making appearances.

But after the glamor and drama comes the part where Maheep Kapoor, Seema Sajdeh, Neelam Kothari and Bhavana Pandey are shown going through emotional turmoil and navigating the ups and downs of their relationships.

Like the first season, Fabulous Lives of Bollywood Wives 2 will also feature Gauri Khan, who is described as the “OG” of the star women’s club by the other four.

The show will premiere on Netflix on September 2 this year.

In her own wedding, the bride broke all limits of boldness, lap dance in front of the guests wearing a backless dress – watch...

Everyone aspires to make their wedding special and memorable. And to fulfill this desire, people make various arrangements and efforts. However, sometimes...

Here’s Why Maruti Is Not Participating In The EV Race

How to save money on energy bills: Avoid putting foil behind radiators – expert