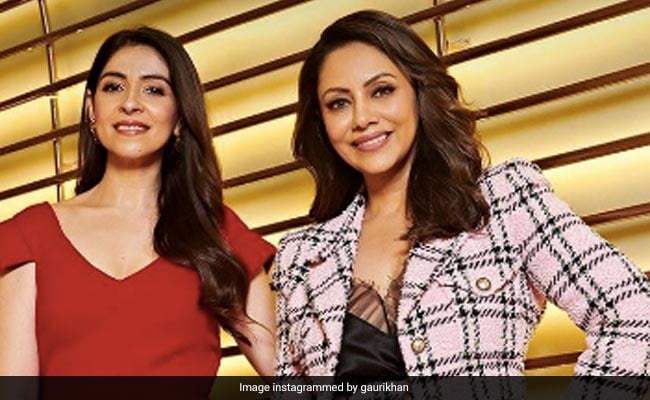 For all the Coffee with Karan fans, we are happy to announce that the latest episode featuring Gauri Khan, Maheep Kapoor and Bhavana Pandey finally came out. As Karan Johar said, “This girl gang is here to spill everything on the Koffee couch.” We couldn’t agree more. The episode was all the more fun. Why wouldn’t it be? We have Karan Johar in the hot seat. From discussing their three-decade-old friendship to the ups and downs of their lives, the trio made the episode a hit. The highlight was the posts shared by their daughters – Suhana Khan, Ananya Panday and Shanaya Kapoor. The trio, who have been best friends since childhood and often call themselves “Charlie’s Angels”, have made it a point to spill secrets about their darling mums.

While Ananya Panday and Shanaya Kapoor shared video messages about their moms, Suhana opted for an audio note due to a work contract.The one thing they all agreed on was that their mothers are also their best managers, or should we say their “momagers”.

Suhana Khan, while talking about Gauri Khan, was all praise for her mother for “being the most confident person.” Suhana also revealed that she seeks her mother’s approval before posting anything on social media, as Gauri Khan is “always right”.

In the audio message, Suhana Khan can be heard saying, “I feel like there isn’t a single word I can use to describe my mother. But I feel like every time I think of her, I think she’s the most confident person I know. And she doesn’t, she doesn’t want to. And she’s not rude about it or anything. But she’s so comfortable with herself. And I think that’s what I admire the most. She is also a kind of “momager”. Like not at all, she will, she wants to see everything before everyone can see it. So sometimes I’m like, ‘Let me just post a picture, without showing you first.’ But then I always send it to him. Because I’m fine, I don’t want it… Because I know she’s always right.

Did you know that Ananya Panday’s team at work has a nickname for her mom Bhavana? “We call it BBB, which is Bigg Boss Bhavs because all the information goes to my mom, about how my hair looks if my lipstick shade fits, if my clothes fit, if that jacket fits , what shoes should I wear with what. She’s all over the place and everyone on the team is very terrified of her… She’s definitely my momager in that sense and she’s very good,” Ananya revealed.

We all agree with Shanaya Kapoor that Maheep Kapoor is “no ordinary mother, she’s a cool mother”. Here’s the reason, according to Shanaya: “Whenever I have to go out, stay out late, or do something wrong, she always tells me, ‘It’s okay. I’m going to hide from daddy. I’m going to do this. , you are going to have fun. She is extremely cool and allows me everything.

The trio also opened up about why they look up to their mothers and how “nosy” Gauri Khan, Maheep Kapoor and Bhavana Pandey can be when it comes to their personal and professional lives, all in a good way.

Urfi Javed posted a video of her new outfit made from cycle chains on Instagram. The TV actress was trolled by netizens for...

Umar Patek: Bali bomber released on parole in Indonesia after serving half of 20-year sentence

Urfi Javed told the secret of beauty, she does this work daily for fitness