GTA 6 can wait thanks to this GTA 5 graphics mod 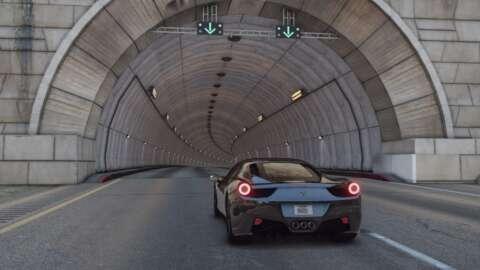 The mod scene for GTA 5 has been exciting since its release on PC just over seven years ago and continues to grow. This graphic mod for GTA 5 is so impressive that it reminds of The Matrix Awakens and maybe gives a glimpse of what GTA 6 could look like.

NaturalVision is a long-standing visual enhancement mod for GTA 5, like described by Kotaku. The mod initially got a full release as NaturalVision Remastered, but development continued as NaturalVision Evolved. In a new trailer, the mod team shows off their work and describes recent additions to the mod.

This latest update adds parallax roads, sidewalks, and building interiors, giving the ground more layered textures and giving inaccessible interiors the illusion of depth. A greater variety of vegetation and volumetric clouds lends additional fidelity to the game’s natural landscapes. Finally, this update overhauls the lighting and adds animated signs to the game. The mod is also fully compatible with FiveM, a popular multiplayer modification.

The mod does not have a full version yet, but it is in early access beta and you can download it for free from the Razed Mods Website. Razed Mods is also responsible for similar visual overhauls for Red Dead Redemption 2, GTA Trilogy, and Dying Light 2.

‘Smile’ review: Horror in the throes of trauma

‘The Crown’ gets a new queen