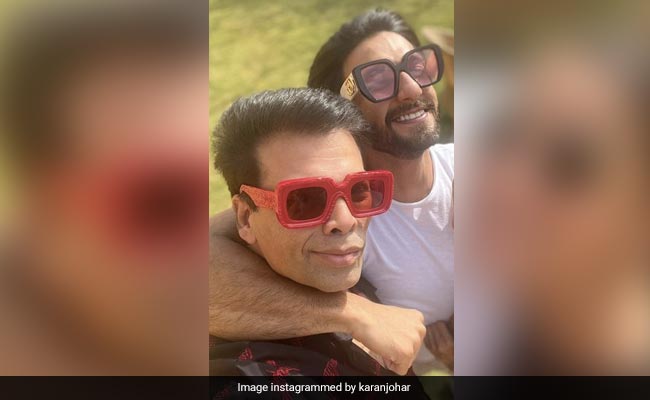 Karan Johar, who worked with Ranveer Singh in his new directorial project Rocky Aur Rani Ki Prem Kahani, shared a detailed note for the actor on Instagram on Friday. Karan Johar began the post by clarifying that his note is “not a marketing diary” and that there are no upcoming projects. This special post has no special occasion, said Karan Johar. He began the post with these words: “No… There is no opportunity… no marketing agenda… No launch in sight! Nothing! It’s just a feeling that I want to share with everyone! I have come to love Ranveer Singh! The man! The person! The ball of love that he is! His ability to make everyone he meets feel so special.

Karan Johar has written about the art of Ranveer Singh as well as the person he is. “The love he exudes that consumes his being and his whole aura…His passion to express every little gesture of love…Throughout the duration of my film, I watched him closely and remotely as to what a solid guy he is! Yes, he’s got his idiosyncrasies as an artist, but that’s what we see translating so well on celluloid! So he’s ok! On the plan personal, I was so touched at so many times just by his generosity of spirit! I love you Ranveer! Never lose sight of that “good basha“you were raised to be.” read Karan Johar’s message.

Earlier this week, Ranveer Singh shared a post for Karan Johar after finishing his schedule Rocky Aur Rani Ki Prem Kahani and he wrote: “Many days of – hearty laughter, tears, mischief, love, blood and sweat. Somewhere between the action and the cut, this Kahani found a family in the hearts of everyone on set. In the video, talking about his experience working with KJo in the film, Ranveer said, “I always wanted to be in a Karan Johar movie, in a Dharma movie. I had no idea that my first Dharma film would be directed by the man himself, the boss, Karan Johar.”

The ‘secret’ to waking up ‘alert and rested’ – new study