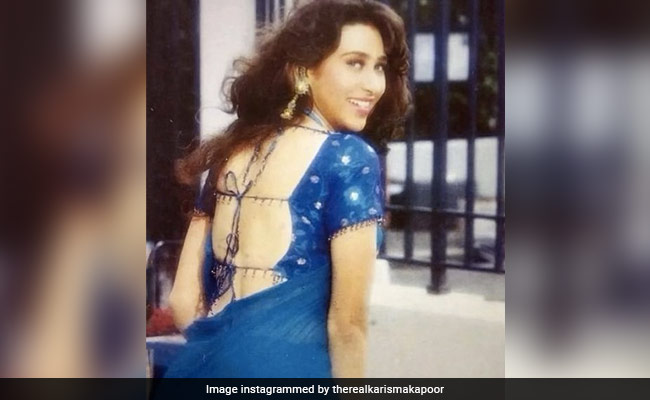 Karisma Kapoor’s Friday post comes with a guessing game. The actress has once again taken the path of nostalgia, and we’re not complaining. She shared a photo of herself from “the days of the chiffon saree and the smile”. On the photo, Karism is all adorned with a stunning blue chiffon saree. The diva looks better than ever as she shows off her million dollar smile. Next to the photo, she wrote: “The days of chiffon sarees and smiles.” Karisma asked her fans to guess the name of the movie. And she even drops a hint, saying, “Do you remember the movie? Hint: It was a love triangle. Any guesses?

Well the picture is from the movie And I, which also included Sunny Deol and Salman Khan.

From chiffon sarees to latex pants, Karisma Kapoor has been a fashion inspiration for many. A few days ago, she reminded us. Karisma shared an image of herself wearing a cropped top and black latex pants which are very trendy these days. FYI: We all know that the Kardashians, especially Kim Kardashian, are credited with making latex pants that are in high demand. Alongside the photo, the actress wrote, “Hey Kim, Lolo did it first,” along with three emojis which included a zippered mouth, a smiley face with sweat, as well as an emoji who laughs with tears.

Karisma Kapoor’s throwback photos are golden. And, here is yet another proof. On Mother’s Day, the actress shared an adorable childhood photo of herself with her mother Babita. In the caption, she said “Mom and the Mountains” with a hashtag “Happy Mother’s Day.”

Karisma Kapoor will next be seen in the crime drama Brown – The first case.

Previous articleCall of Duty: Warzone Announces ‘Fifth and Final’ Season
Next articleIND vs ZIM: Before the national anthem, KL Rahul’s gestures are echoing on Twitter. watch

Analysis: ‘Hocus Pocus 2’ will cast a spell on you