Mario Kart: The Agony And The Anguish Of The Blue Shell 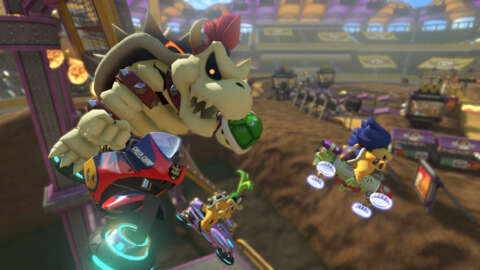 Mario Kart is celebrating its 30-year anniversary today, August 27, 2022. Below, we take a look at one of the most controversial power-ups in video games, the infamous Blue Shell.

There is no single item in all of video games as hated and feared as Mario Kart’s Blue Shell, aka the Spiny Shell. Though it didn’t debut with the original game on the Super NES, the item has become a recognizable icon and a part of the series’ identity. It is the ultimate equalizer, representing not just a single mechanic in a single Mario spin-off, but Nintendo’s entire philosophy of play. Naturally, some people just really hate the damn thing.

The original Super Mario Kart was essentially a pure test of skill, rudimentary as it was. The tracks were flat and it approximated the idea of 3D by rotating and scaling the map around the player’s kart. The items were mostly recognizable, aside from a few oddities like the Feather to jump over obstacles, and specialized items that would only appear for CPU-controlled versions of Bowser or Yoshi. There was no spiny blue shell in the bunch. The most powerful item was the Lightning Bolt, which had an extremely low probability of appearing across the board and only slightly higher if you were trailing behind the pack. It was an equalizer, sure, but its effect was distributed more or less equally. It hit every racer except the one who triggered the item, so whether you were in first place or fourth place, you were impacted.

Then came Mario Kart 64, a massive improvement over Super Mario Kart in almost every way. The tracks were bigger and more varied, a new power-slide and dash maneuver raised the skill ceiling for serious karters, and there was a real sense of 3D space. Plus, there were new items like the Gold Mushroom, Fake Item Box, and of course, the Blue Shell. The powerful new catch-up tool didn’t replace the Lightning Bolt, but it added another, more targeted effect. Rather than hit everyone except the user, it went on a journey to seek out the first-place leader and ruin their day. Like an upgraded Red Shell, it had heat-seeking properties to find its target, but it was only really interested in one target. Anyone else who got caught in its path would be knocked into the air too, but that was collateral damage. The Blue Shell just wanted the leader to suffer.

The Blue Shell was, admittedly, a little unfair. For one thing, it essentially provided an invincible shield if you held it behind you, unlike other items like the Banana or Green Shell that would break if a projectile made contact. Its laser-like focus on the first-place finisher set up scenarios where it paid to be a close second. Mechanically, it was a rough first draft.

Besides all that, though, it also seemed, well, mean. If you were lagging behind in 8th place, hitting the first-place finisher didn’t really help you catch up. As opposed to the Lightning Bolt that impacted everyone, and therefore gave you an opportunity to improve your position, this new item just seemed to be born of spite. “I’m not going to win,” it seemed to say, “but neither are you.”

Future iterations of the Blue Shell would be revised to sand off the rough edges. Double Dash added wings so that it would hover above the track rather than ping-ponging its way through every other racer, a feature that remained through several games. Future iterations would add an explosive effect so that everyone immediately surrounding the first-place finisher would also get hit, to keep second-place from gaming the system. Under the hood, Nintendo subtly tweaked the probability of pulling a Blue Shell so that you’d be most likely to get it if you were in the middle of the pack, rather than trailing at the very end. That change meant that the item was more likely to actually make a difference for your own ranking, rather than just screwing over someone else.

There have also been a variety of ways to avoid the Blue Shell, even if you’re in first place, with varying degrees of skill required. Sometimes you would have to do a jump-dodge with perfect accuracy to dodge the Blue Shell, while more recent games like Mario Kart 8 and Mario Kart Tour have introduced the Super Horn to provide a hard counter. The odds that you’ll happen to pull a Super Horn and be in first place and still have the Super Horn in-hand when a Blue Shell is on your tail are not great, exactly, but it at least provides a glimmer of hope.

But after all the recriminations and controversy, why does Nintendo maintain the Blue Shell? It has removed items from Mario Kart before and added others. What makes this one worth keeping despite the hate? What can it tell us about how Nintendo views its philosophy of fun?

In an interview with Kotaku in 2011, Super Mario Kart and Mario Kart 64 director Hideki Konno said he “wanted to create a race where everyone was in it until the end.” This explains the initial introduction of power items like the Lightning Bolt in Super Mario Kart and the Blue Shell in Mario Kart 64. Today’s Blue Shell is more targeted toward the leaders, not just the singular first-place leader, and Nintendo has inserted items that serve as hard counters. It can still serve its purpose as an equalizer, but not quite as brutal of one.

You need a javascript enabled browser to watch videos.

Want us to remember this setting for all your devices?

Please use a html5 video capable browser to watch videos.

We also can’t underestimate the fact that the Blue Shell has just become iconic in the annals of video game history. Nintendo obviously recognizes this status as a historical artifact. A special edition of Mario Kart 8 when it first launched on the Wii U even included a figurine of the Blue Shell, a clear hat-tip to its seminal status.

More narrowly, though, the Blue Shell has become synonymous with Mario Kart. The family-friendly series is not a serious racer like Gran Turismo or an edgy car combat game like Twisted Metal. It exists in the uncanny in-between as a competitive game that doesn’t want you to get all that competitive. C’mon, these are turtles and princesses and babies riding around in go-karts. Maybe the real lesson of the Blue Shell is that we should be able to get together and do something silly, like race around a giant pinball machine or a cloud castle, without getting too obsessed with our win-loss record.

“We’re always experimenting with what new elements to introduce or what elements can be removed,” Mario Kart 8 director Kosuke Yabuki told Eurogamer in 2017. “We have tried–or we are trying–to see what the game’s like without the Blue Shell. When we’ve experimented without the Blue Shell, actually it feels like something’s missing. Like there’s something not quite enough in the game. So for now we’ve kept it in.

“You know,” he said, “sometimes life isn’t fair. Sometimes in life you have something where you feel that’s not right, and that’s frustrating.”

So there you have it. Thanks to the Blue Shell, sometimes Mario Kart is arbitrary and unforgiving and even a little mean. Sometimes life is too. Maybe we just need to be okay with that.

The products discussed here were independently chosen by our editors.
GameSpot may get a share of the revenue if you buy anything featured on our site.