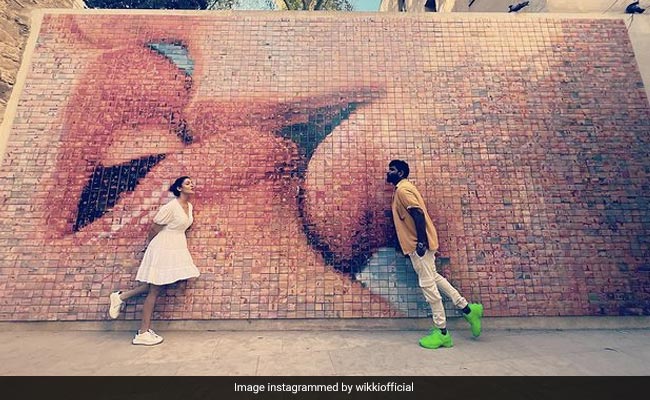 Nayanthara and Vignesh Shivan spend unforgettable moments during their holidays in Spain. The filmmaker shared new photos on his Instagram handle, in which they can be seen posing at the Kiss Wall in Barcelona. In the footage, Nayanthara and Vignesh stand at either end of the wall and pout. The actress looks pretty in a white dress paired with white shoes, while Vignesh looks dapper in a white ensemble layered over a yellow shirt.

Sharing the post, Vignesh Shivan captioned it as: “At the Kiss Wall Barcelona”. Shortly after sharing the post, fans flooded the comments section. One user wrote ‘Cutest Couple’, while others dropped heart emojis.

On Wednesday, Vignesh Shivan shared several close-ups of Nayanthara and captioned it as follows: “#Nofilter only natural Glitter Natural sunlight that caressed the painted glass, kissed her skin before I could. The light, the mood, the quirky vibe of this place It was a never before felt experience for the two of us! Sharing some photos that I enjoyed clicking in this series.”

Shortly after the couple checked in to Barcelona, ​​Vignesh shared these photos:

Meanwhile, on the work front, Nayanthara has multiple flicks in her kitty – Atlee’s Jawan with Shahrukh Khan, Godfather with Chiranjeevi and Gold.

9 Most Popular Desserts From Around The World