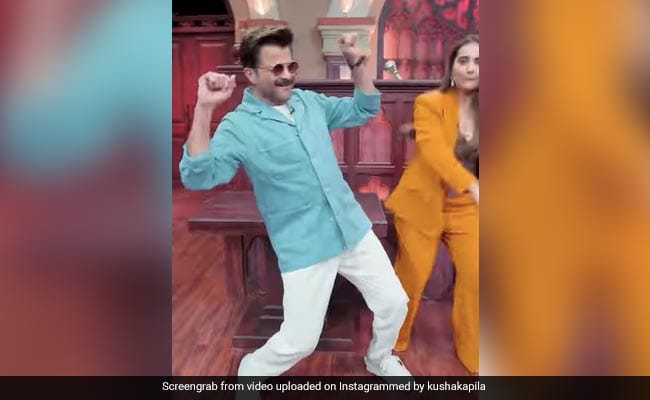 Anil Kapoor in a still from the video. (courtesy: kushakapila)

We can’t thank content creator Kusha Kapila enough for sharing this super fun video with veteran actor Anil Kapoor. The video happens to be from the sets of the Amazon MiniTV show Toh Banta Hai Case. The video starts with Kusha asking Anil Kapoor to join her for the viral social media challenge, where they are expected to dance to the My money don’t shake Track. Anil Kapoor, following the trend, tries to do the popular routine. However, he can’t help but do the My name is Lakhan moves. Full points to Anil Kapoor for trying though.

Check out the video posted by Kusha Kapila here:

In terms of work, Anil Kapoor was last seen in Dharma Productions JugJugg Jeeyowith Neetu Kapoor, Varun Dhawan and Kiara Advani. The actor also signed Sandeep Reddy Vanga’s Animalwith Ranbir Kapoor, Bobby Deol and Rashmika Mandanna. He recently shot for a segment of the film at the Palais Pataudi, footage of which has gone viral.

In the last few years, Anil Kapoor starred in the Netflix thriller AK vs. AK, with filmmaker Anurag Kashyap. He also featured in malangwith Disha Patani and Aditya Roy Kapur.

Caravan and camping holidays: Europe’s best destination – camping ‘in the vineyards and by the lakes’ | Travel News | Travel