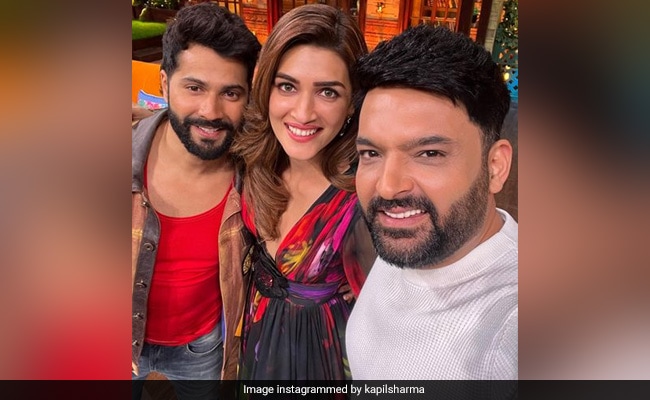 Varun Dhawan and Kriti Sanon Bhediya opened in theaters today. The Amar Kaushik the director also stars Deepak Dobriyal and Abhishek Banerjee. Before the theatrical release of the film, the team Bhediya appeared on Kapil Sharma’s comedy show to promote the horror comedy. Their visit was filled with fun, heartwarming and thrilling memories. Host Kapil Sharma on Thursday posted photos with Varun, Kriti, Amar Kaushik, Deepak and Abhishek and sent them “best wishes” for their film. In the images, the actress looks stunning in a black dress with abstract patterns. Varun Dhawan opted for a casual look – a red waistcoat, a brown jacket and gray jeans. In the caption, Kapil Sharma wrote, “Best wishes to my brother Varun Dhawan, Kriti Sanon, Deepak Dobriyal, Abhishek Banerjee, Mr. Amar Kaushik and all the team at Bhediyagoing out tomorrow.

Kapil Sharma also shared a video, showing how Varun Dhawan made a filmed entrance on The Kapil Sharma show. The clip also features Kiku Sharda, or should we say Gudiya Laundry Wali, asking Abhishek Banerjee to find her a groom via auditions and Kriti Sanon setting the stage on fire by dancing to Thumkeshwari song.

Bhediya, produced by Dinesh Vijan, is based on popular folklore. The shooting of the film took place in Arunachal Pradesh.

The Bhediya team explains what sets the film apart: “Don’t think the creature comedy has already been done

To Navya Nanda, birthday girl and “Jedi”, the wishes of mom Shweta and uncle Abhishek