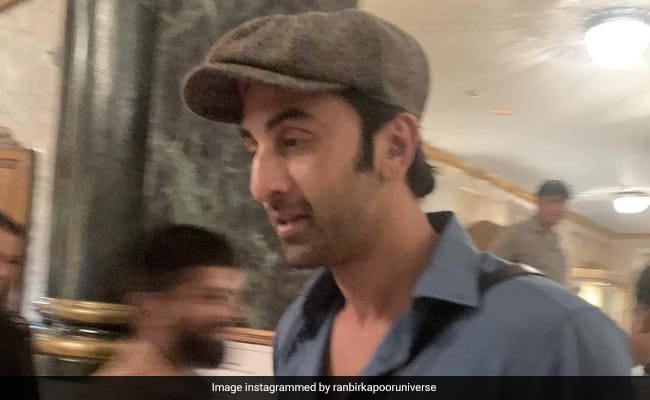 Ranbir Kapoor in Barcelona for his next film (courtesy: ranbirkapooruniverse)

Ranbir Kapoor seems to be making the most of his time in Spain. The actor is in Barcelona with Shraddha Kapoor shoot for their next film. A video of the sets of the film made the rounds of the internet. It appears to be a song sequence as Ranbir kneels before Shraddha with many dancers surrounding them. Besides that, many photos of Ranbir posing with fans have also been shared on Instagram. In some of them, the actor wears a beret with a simple t-shirt and shorts.

Take a look at Ranbir’s Spanish diaries below:

Another image of Ranbir and Shraddha which has become the talk of the town features the Sanju actor lifting Shraddha in his arms on the set of the film.

Take a look below:

Ranbir Kapoor and Shraddha Kapoor collaborate for the first time on a romantic comedy, directed by Luv Ranjan. Luv Ranjan is known for his hits like Pyaar Ka Punchnama and Sonu Ke Titu Ki Sweety. Earlier this year, the director married his longtime girlfriend Alisha Vaid in Agra. For the wedding, Ranbir, Shraddha, Kartik Aaryan, Arjun Kapoor and some other celebrities attended the festivities.

On the work front, Ranbir is preparing for the release of two projects. We will see it in Karan Malhotra’s Shamshera with Sanjay Dutt and Vaani Kapoor. Later this year, he has Ayan Mukerji’s brahmastra in the professional range. It also stars Alia Bhatt, Amitabh Bachchan, Nagarjuna and Mouni Roy. Ranbir has also collaborated with Arjun Reddy famous Sandeep Reddy Vanga for Animalwhich co-stars Rashmika Mandanna.

Previous articleBiden to push Congress for three-month gas tax holiday
Next articleIndia vs Leicestershire: When and Where to Watch Live Telecast, Live Streaming

Who is Bix from Andor?

Purple potatoes may help ’cause cancer cells to self-destruct’