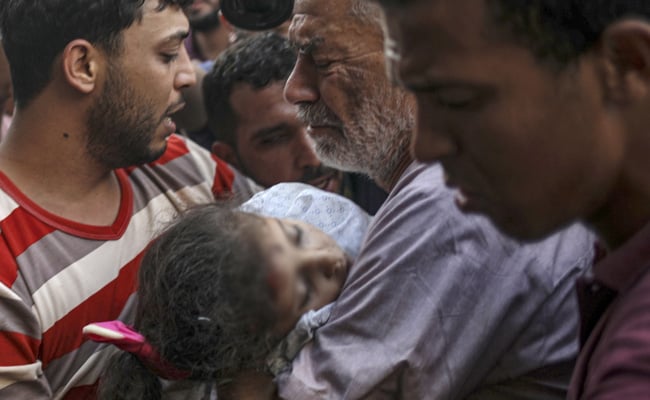 Alaa Kaddum run by her grandfather Riad in Gaza.

A five-year-old girl was among 10 people who were tragically killed in Gaza as the region witnessed the worst escalation in violence in a year on Saturday. Israel pounded Gaza with airstrikes which the Palestinian terror group Islamic Jihad responded with rocket fire.

As her family prepared for the funeral, Alaa Kaddum’s small body, wrapped in a white cloth, was held by her family members. A pink bow in her hair and an injury to her forehead were seen in the video shared by news organization Middle East Eye.

“She dreamed of going to nursery. She wanted a bag and clothes… This innocent girl. Was she in charge of the rockets or was she fighting? What did she do?” asked Riad, distraught.

“That innocent girl. Was she responsible for the rockets or was she fighting? What did she do?”

The family of Alaa Qadoom, the five-year-old girl killed by an Israeli airstrike on a residential building in Gaza, prepared her body for burial. pic.twitter.com/00udU7oo98

While Hamas-controlled Gaza health authorities said 10 people were killed and 79 injured in the bombardment, the Israeli military estimated that its operation killed 15 terrorists.

Israeli Prime Minister Yair Lapid says the Jewish state was forced to launch a ‘pre-emptive anti-terror operation against an immediate threat’ posed by the Islamic Jihad group, after days of tensions along the Gaza border .

Islamic Jihad is a group that, while aligned with Hamas, also acts independently. The terror group said the first Israeli bombardment amounted to a “declaration of war”, before unleashing a flurry of more than 100 rockets towards Israel.

Israeli rocket fire and strikes continued overnight, risking a repeat of an 11-day conflict in May 2021 that devastated Gaza.

Israel and Islamic Jihad on Friday confirmed the killing of a senior leader of the Taysir al-Jabari terror group.

“Israel is not interested in a broader conflict in Gaza, but it will not shy away from it either,” Prime Minister Lapid said in a nationally televised address.

How an arcane 96-year-old law stopped the rail strike