French physicist shares photo of sausage as ‘star’ and apologizes 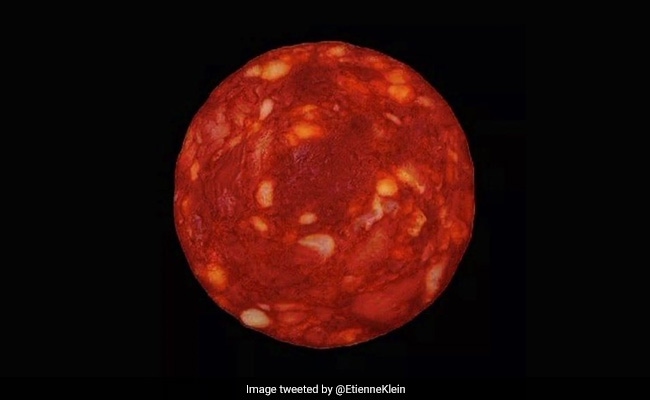 A red ball of spicy fire with luminous spots that glow menacingly against a black background.

This, said eminent French scientist Etienne Klein, was the last stunning image taken by the James Webb Space Telescope of Proxima Centauri, the closest star to our Sun.

Fellow Twitter users marveled at the details of the photo allegedly taken by the telescope, which delighted the world with images of distant galaxies dating back to the birth of the universe.

“This level of detail… A new world is revealed every day,” he said.

But in fact, as Klein later revealed, the image was not of the intriguing star just over four light-years from the Sun, but a much more modest slice of chorizo ​​a la spanish sausage.

“According to contemporary cosmology, no object belonging to Spanish cured meats exists anywhere but on Earth,” he said.

Klein acknowledged that many netizens misunderstood his joke, which he said was simply meant to make us “be wary of arguments from people in positions of authority as well as the off-the-cuff eloquence of certain images.”

However, at a time when the fight against fake news is of paramount importance to the scientific community, many Twitter users indicated that they were not amused by Klein, director of research at the Office of the Energy Commissioner. Atomic Energy (CEA) and producer of radio programs.

On Wednesday, he said sorry to those who were misled.

“I come to apologize to those who may have been offended by my prank, which was nothing original,” he said, calling the post a “scientist’s joke.”

He was soon back on safer ground when he tweeted an image of the famous Cartwheel galaxy taken by the James Webb Space Telescope. This time, he assured users, the photo was real.

Saudi Arabia and China will align on everything from security to oil, but agree not to interfere on domestic issues