This is the first photo ever taken 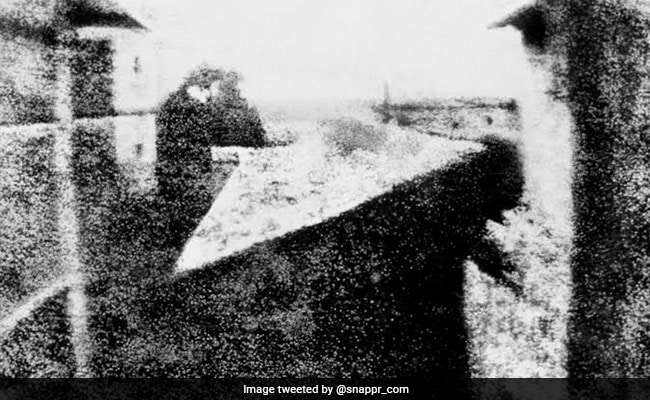 Photography is both an art and a science. It’s the science for the novice who needs rules and guidelines to master the craft, and the art for the masters to carve out a place for themselves, setting them way above everyone else. On World Photography Day (celebrated on August 19), it is important to know the rich history of photography and who took the first photograph. The ancient Chinese and Greeks might have known the earliest methods of projecting an image onto a screen with a pinhole configuration. In the 16th century, an Italian scientist modified the pinhole “camera obscura” by using a lens instead of a hole to project the image. But this method could not capture an image permanently.

According National geographic, the world’s first photograph was taken by French scientist Joseph Nicéphore Niepce. It was titled ‘View from the Gras window‘ and captured a view of a courtyard and outbuildings as seen from the upstairs window of Mr Niepce’s house.

Since photography was still in its infancy at that time and several experiments reproduced what was captured, Niepce tried his own way. To obtain the permanent photograph, he exposed a bitumen-coated plate in a camera obscura for several hours on his window sill.

Photography has always served the press. According to the Encyclopaedia Britannica, he became part of war reporting when Roger Fenton sailed from London to Crimea to photograph the war between England, Russia and Turkey in 1855.

He was sent to provide visual evidence to counter reports sent by Times of London war correspondent William Russell, the Encyclopaedia Britannica added.

During his four-month stay, Mr. Fenton produced 360 photographs, the first large-scale photographic documentation of a war.

Since its invention, photography has only gotten better with time. From a simple hobby, it is now a profession in its own right for many. Photography is no longer just a technology but a means of expression that allows you to say a thousand words with the click of a button. World Photography Day is celebrated by all who practice the art form to recognize its potential and spread troglodytes about it.