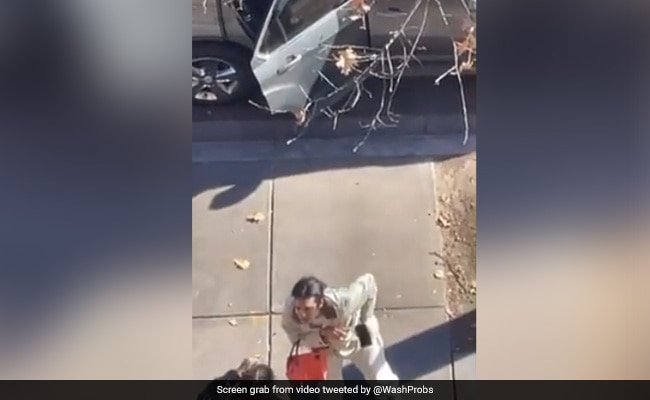 The video appears to begin shortly after the confrontation begins.

A video of an American woman shouting racial slurs at her Uber driver has gone viral on social media and left the internet seething. In the video, the woman can be seen arguing loudly with a black man, allegedly her Uber driver, on a sidewalk in Cathedral Heights in DC before using the racial slur.

The video, recorded by a woman from the building next to the sidewalk, shows the two in an altercation with the car parked at the side of the street and with its door open.

TRIGGER WARNING: Seen in Cathedral Heights, DC this morning. Apparently this man was her Uber driver and is being verbally and physically assaulted by this woman. She repeatedly hurls racial slurs at him. pic.twitter.com/u0gJhUyvK5

The video appears to begin shortly after the confrontation begins. The woman can be heard calling the man “psycho” and asking him to “take his meds”.

“I’m your boss. I employ you. I’m your boss,” he can be heard shouting repeatedly, before shouting the racial slur at him and trying to walk away.

As the man reacts, she repeats the insult several times before calling the driver a “slave”. The woman recording the video can be heard gasping and questioning the racist tirade.

The video has been viewed more than 2.8 million times on Twitter, with most viewers demanding police action against the woman while others try to identify her.

Such behavior is never acceptable. We have a zero tolerance policy for discrimination. If you have more information about the Uber rider or driver, please DM us so we can investigate. https://t.co/sd7yH5AX3h